Thirty seasons ago Liverpool enjoyed a comfortable 3-1 win against table topping West Ham at Upton Park, with Michael Robinson hitting a hat trick to the disbelief of Kenny Dalglish.

Signed that summer from Brighton and Hove Albion for £200,000, Robinson had struggled to make his mark on the Liverpool side so far. He hadn’t scored in his first eight league appearances, although he had got two in a comfortable 5-0 win at Anfield over Odense Bk in the European Cup.

Whilst Robinson struggled individually, the team were also taking their time to get going under new manager Joe Fagan. They were sixth in the table and had lost two of their opening eight games. West Ham were the early pacesetters at the top and had won all four of their home games, scoring fifteen goals in the process but on this particular afternoon they were made to look ordinary by a rampant Reds side. 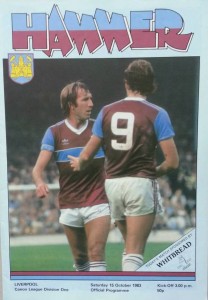 Fagan made one change to the line-up, Phil Neal being recalled in place of Steve Nicol. He almost gave the Reds the lead in the eleventh minute when he hit a low shot from a corner that Phil Parkes dived to his right to save. This was Parkes’ first save of the game, with an earlier effort from Graeme Souness going well wide and an attempted headed clearance by Ray Stewart going over him but thankfully bouncing off the crossbar.

The deserved opening goal came after fifteen minutes courtesy of a huge wind assisted punt downfield by keeper Bruce Grobbelaar, the ball landing in the ‘D’ of the penalty area. As Parkes raced out of his goal to try and punch the ball clear Robinson bravely flung himself forward and headed it into the net. There was little celebration though as he fell awkwardly and had to be treated by Ronnie Moran before play resumed.

The second came in the 25th minute after Billy Bonds had made a complete hash of a Craig Johnston cross, heading the ball high into the air. When it landed Souness cleverly backheeled it into the path of Robinson, who fired it home with his left foot from the edge of the six yard box. Liverpool were in total control with Alan Kennedy and Ian Rush both forcing Parkes into making good saves and Grobbelaar didnt make his first save until the 39th minute, when he easily held on onto Steve Whitton’s low shot.

The second half began in monsoon type conditions and Liverpool were now against the wind, but West Ham couldn’t use it to their advantage. In the 57th minute Rush took a knock and was replaced by David Hodgson, then in the 64th Craig Johnston was sent off for a second bookable offence after he had fouled Billy Bonds.

If Grobbelaar hadn’t turned Alan Devonshire’s shot round the post with his legs the Reds could have been in for an uncomfortable final quarter of the game, but with Alan Hansen and Mark Lawrenson in total control at the back they never looked like losing their lead despite being down to ten men.

Robinson completed his hat trick in the 74th minute after a clever ball into the box from Kenny Dalglish. After letting it bounce once, Robinson struck it on the half volley from near the penalty spot, giving Parkes no chance. He then ran with his arms raised to the celebrating Liverpool fans in the corner section of the South Bank terracing where they were gathered.

West Ham’s consolation came four minutes from time and was one of Grobbelaar’s classic mistakes. Trevor Brooking went on a good run and laid off to Alan Devonshire, who burst into the box and hit a low shot towards the right hand corner of the goal. Somehow, in trying to turn the ball around the post the Reds’ keeper instead managed to divert it under his body into the net. Although it was academic, he was still given a load of verbals from an arm waving Alan Kennedy.

In the dressing room after the game, all of the players signed the match ball with Dalglish adding ‘I don’t believe it.’ The win lifted the Reds up to fifth in the table and was the start of a four match winning sequence that would take them to the top by early November. Liverpool would eventually end the season with a third successive championship, while also adding the League Cup and European Cup, in which Robinson came on as a substitute for a tiring Dalglish in the final.

Robinson left Liverpool in December 1984 for Queens Park Rangers. This treble was half of his final total of six goals in thirty league appearances and his first team opportunities were seriously hindered by the arrival of Paul Walsh. In 1987 he joined Osasuna in Spain and has lived there ever since, carving out a successful career in punditry after he retired from playing.

When interviewed by Simon Hughes for his book Red Machine, many Reds players who played with Robinson said he was the most likely to go on and have another career in later life. Many of them have joked that he is better analysing the game than playing it and Robinson himself replied ‘I couldn’t disagree with that.’ Nobody can take away this massive contribution he made to Liverpool’s league title win that season though.