Back in the 1960s Leicester were something of a bogey side for Liverpool but as they closed in on the 1964 league title the Reds finally broke the spell. Goals from Roger Hunt and Alf Arrowsmith gave the Reds a 2-0 win, but only after the Filbert Street groundstaff had re-painted the lines and posts.

With nine games to go of the 1963-64 season Liverpool were locked in a three way battle with Everton and Tottenham Hotspur at the top of the 1st Division. The title was in Liverpool’s hands as they had two games in hand on leaders Everton, who were two points ahead, but pundits suggested the Blues had an easier run in. One  of their fans was so confident that he even wrote to the Liverpool Echo suggesting that their fixture against FA Cup finalists West Ham on 25th April should double as the following season’s Charity Shield.

The Easter period, when teams faced a gruelling schedule of three games in four days would prove crucial and Liverpool faced Spurs at both White Hart Lane and Anfield, with the Leicester game sandwiched in between. Everton had home games on successive days against Blackpool and West Bromwich Albion, followed by a trip to the West Midlands for the return game with Albion.

Liverpool’s squad set off for London on the Thursday before Good Friday, the day that ten men were found guilty at Aylesbury Crown Court of various charges in relation to the Great Train Robbery. The Reds’ party of thirteen was without captain Ron Yeats, who was serving a three match suspension  after getting sent of for fighting in an FA Cup tie at Arsenal the previous month. Chris Lawler deputised for him at centre half but otherwise the Reds were at full strength, with Gordon Milne captaining the side.

In front of 56,952 at White Hart Lane, Roger Hunt hit a hat trick as the Reds dominated from start to finish in a 3-1 win. Many of the home crowd had already left when Maurice Norman scored a late consolation, while the threat of Jimmy Greaves and recent £72,000 signing Alan Mullery was completely nullified by the Reds back line.

There was a further boost when news came through that Everton had dropped a point at home, getting booed off in a 1-1 draw with West Brom. There was no time for celebrations though as the squad then headed for Leicester, where they would be playing less than 24 hours later. Bob Paisley had with him an electrical massage box, which was to be used on Milne and Hunt who had both picked up knocks to their ankles, but Shankly was confident they would be fit for the game.

They were joined in the East Midlands by an army of fans who had also gone to London, many not having any accommodation. Once in Leicester, a few fans scaled the low walls of Filbert Street and painted the goalposts, corner flags and line markings red. This exuberance though hid a deep fear that once again the Reds would come unstuck against the Foxes. Since promotion in 1962 Leicester had won all three league games between the sides without conceding a goal, as well as the FA Cup semi final the previous season.

By the morning the rain had led to the repainted markings and posts turning from red to runny pink. Many more Reds fans travelled to Leicester from Liverpool, while Yeats also made the journey, taking a seat in the stands alongside Scottish national manager Ian McColl who would be watching Ian St John, Willie Stevenson and Leicester’s Frank McLintock. 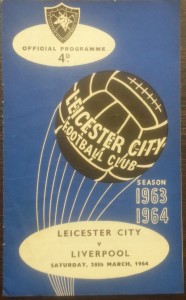 The game was end to end at the start and much more open than previous encounters between the two sides. Ronnie Moran had a free kick deflected wide and after Tommy Lawrence slipped whilst racing from his goalmouth, Bobby Roberts missed an open goal when he prodded the ball wide.

Then in the seventeenth minute the Reds contingent erupted when Peter Thompson crossed and Hunt’s shot was deflected past Gordon Banks by Richard Norman. Colin Appleton got back to the goal but the ball had already crossed the line when he hooked it clear. As the Reds fans celebrated, every outfield Liverpool player ran to Hunt, all of them dancing with joy.

The rest of the first half was a tough affair, Gerry Byrne having his name taken for fouling Mike Stringfellow and the same happening to Leicester’s David Gibson for a foul on Milne. Thompson almost doubled the lead but he saw a shot headed off the line, but Leicester also came close when McLintock’s thirty yard effort came back off the bar.

Early in the second half the Reds had a let off when Billy Hodgson headed over from close range, but they then took the game to the opposition and another shot, this time from Hunt, was cleared off the line with Banks beaten. At the back Byrne and Moran gave nothing away, Lawler was like  a seasoned pro at centre half and the three of them played great balls to the forwards, creating attack after attack. Leicester were defending just like they had against the Reds in previous games but this time there was a major difference, they were not defending a lead but instead trying to prevent a heavier defeat.

With fifteen minutes left Ian Callaghan clashed heads and was severely dazed, leaving Liverpool effectively playing with ten men. But Leicester couldn’t take advantage of this and with five minutes left Hunt passed to Arrowsmith and he drilled the ball past Banks into the bottom corner to the delight of Reds fans on all four sides of the ground. Before the end it was almost 3-0 but Banks saved Arrowsmith’s shot at point blank range.

The win kept Liverpool in second due to Everton beating Blackpool 3-1. However the tide had clearly turned and in the Daily Post on the Monday Horace Yates wrote how the victory was achieved by unrivalled teamwork and that the two away performances had the ‘stamp of champions.’ The following day Spurs were beaten 3-0 at Anfield which, coupled with Everton’s 4-2 defeat at The Hawthorns, took them to the summit of the 1st Division. They were never off it and won the next three games against Manchester United, Burnley and Arsenal to clinch the title with three games to spare. 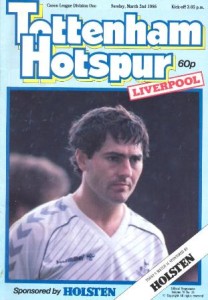