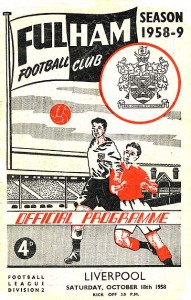 On 27th January 1964 Liverpool kept up their hopes of an League Championship and FA Cup Double when they overcame plucky Port Vale after extra time in a 4th round replay at Vale Park.

Just two days earlier the 1,000/1 outsiders from the 3rd Division has stunned Anfield when they held the Reds to a 0-0 draw. Liverpool Chairman T.V. Williams said afterwards that Vale did not deserve to lose a game in which former Reds reserve forward John Nicholson went close to scoring in the second half.

Not everyone else was quite as complimentary however, with forward Ian St John criticising them for putting too many players behind the ball, writing in his Daily Post column that ‘word seems to have got around that the only way to beat Liverpool is to bolt and bar the way to goal with a packed defence.’ in the Liverpool Echo, Reds correspondent Leslie Edwards was critical of St John and his fellow forwards, saying they had played too narrow and it was Vale who created the better chances.

The 1,200 fans who left Lime Street in the late afternoon on three football special trains were the last to do so for quite a few years. That morning, British Rail announced that following vandalism on a train carrying Evertonians home from their cup tie at Leeds on the Saturday, the latest in a long line of incidents, they would not be running any more specials from the city. Fans queuing for the trains expressed disappointment, as the specials fares were about 60% of the price of the regular services.

Bill Shankly took an unusually large squad of fifteen players to the game, making sure he had an extra man in each department should anyone still have any aches and strains from Saturday. When kick off approached he decided to make some changes and go for experience, recalling Ronnie Moran and Jimmy Melia in place of Bobby Thomson and Alf Arrowsmith. Moran’s return was no great surprise, but Melia’s inclusion raised some eyebrows. The winger was often made the scapegoat by the crowd when the team struggled and he was rumoured to be set for a move elsewhere. It was harsh on Arrowsmith, who had scored four in the previous round against Derby County and followed this up with a wonderful late winning strike against Chelsea the week after.

There was a huge crowd of 42,179 at the game and it was estimated that another 6,000 got in when the gates were rushed at the Railway End. A man from Leek died of his injuries a few weeks later, but such events were not seen as unusual at this time and the incident didn’t even get a mention in the Echo or Post.

Vale didn’t take the game to the Reds as expected, instead defending deep and employing a man marking system which shackled St John and Melia. It took half an hour for the Reds to have a meaningful shot on goal when Peter Thompson’s drive from outside the box shaved the bar as it went over. Five minutes later though Liverpool did take the lead, Roger Hunt breaking free of his marker to latch on to a long ball from Gerry Byrne and cleverly guide it past Tom Hancock.

The second half was no different from the first, with Vale seemingly accepting that their chance had gone. Tommy Lawrence didn’t make his first save until the hour mark, easily holding a low shot from John Rowlands, but despite being in control of things the Reds failed to up their game and finish the tie off. They paid the price with eleven minutes to go when Rowland beat Moran on the left flank and crossed to Stan Steele who nodded the ball down into the path of Albert Cheeseborough, a last minute replacement in the side for the injured Jackie Mudie. Vale’s stand in striker hit an unstoppable shot past Lawrence to the delight of the home crowd. Revitalised, Vale went for the jugular and only the solidity of Moran and Ron Yeats prevented them finding a winner before the ninety minutes were up.

Half time saw very little action, with both sets of players tiring after playing ninety minutes for the second time in three days. There were just two minutes left when Gordon Milne hit a hopeful shot that cannoned off a defender into the path of Peter Thompson, whose volley flew into the top corner. This led to delirium amongst the thousands of Liverpool fans in the ground, two of whom fell through the roof of the railway end and had to be taken to hospital along with another supporter his by falling debris.

For the remainder of the game the Liverpool supporters sang ‘When The Saints Go Marching In’ and ‘We Love You Yeah Yeah Yeah’, then the final whistle was greeted by a mini pitch invasion. Although there was some over exuberance, the behaviour of fans was otherwise exemplary, with none of the special trains being damaged and the licensee of the nearby Star Hotel telling the Post reporter: ‘I have never met a finer lot of people than I did last night. They drank well and behaved well and if they ever come to Burslem again there will always be a welcome for them and their supporters.’

In the next round Liverpool beat Arsenal 1-0 at Highbury, only to be sensationally knocked out by 2nd Division Swansea Town at Anfield in the quarter final. In the league they more than made up for it though, clinching their first title since 1947 with three games to spare.