Sunday is the fourth time that Liverpool and Aston Villa have met in the FA cup semi final, with the Reds winning two of the three previous meetings. Liverpool’s first victory came 101 years ago when they sprang a surprise by winning 2-0 against a Villa side who had won their fifth FA Cup the year before.

Liverpool had a fairly straightforward route to the last four beating Barnsley, Gillingham, West Ham and Queens Park Rangers, who were all lower division clubs. The semi final draw though paired them with Aston Villa, the current cup holders who were second in the league table. Eyebrows were then raised by the choice of venues for the games, with Liverpool and Villa having to play at Tottenham’s White Hart Lane and the other semi final, between Burnley and Sheffield United, taking place at Manchester United’s Old Trafford ground.

It may have seemed more logical for Liverpool and Villa to play at Old Trafford and Burnley take on Sheffield United at Villa Park, but the FA was just as strange in their venue choice back then as they have been in more recent years. Referring to the decision the Liverpool Evening Express commented that ‘it is a far far way to Tottenham’ and that ‘The FA have some funny ways.’ Manager Tom Watson was scathing about the decision to play the game there, pointing not just to the extra distance that Liverpool’s fans had to travel but also to Villa’s popularity in London. This meant that the opposition would be backed by the majority of the crowd and there was even speculation that a ground record for White Hart Lane would be set.

Liverpool’s players would spend five days in London preparing for the game. This was in contrast to Villa who remained in Birmingham but along the lines of the other two semi finalists who both spent a week at Lytham St Annes. A party of thirteen players accompanied by Tom Watson and director Mr Bainbridge set off from Lime Street station on the morning of Monday 23rd March. One player missing was inside forward Billy Banks, who had scored three goals in three appearances since breaking into the side earlier in the month. He was ineligible for the FA Cup though, having played in the qualifying rounds for Ashington earlier in the season.

Their base was the Royal Forest Hotel in Chingford, situated next to a hunting lodge used by Queen Elizabeth I. They arrived to wet weather but it was dry the following day and remained that way for the rest of the week. There was very little ball  training at Chingford, their preparation instead consisting of sprints and exercises overseen by Watson and Bainbridge. They relaxed by playing golf and billiards and visited a music hall in Walthamstow on the Tuesday night. Hotel management were pleased with the Reds players, referring to them as the ‘most gentlemanly and sociable party of footballers’ they had met. Plenty of others had stayed at the hotel and it was something of a lucky omen with Everton, Manchester United and Tottenham all having used it as a base prior to winning cup finals. 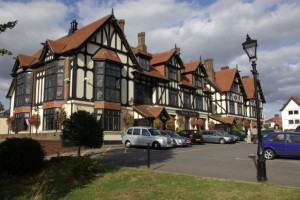 Villa were the clear favourites given they were second in the league compared to Liverpool’s fifteenth. The prevailing nationwide opinion was that the Reds were just going to Tottenham to collect the gate money, but Watson believed this made his players only more determined to succeed. Watson was cautious about his team’s chances of causing an upset but felt that no team was invincible and Liverpool’s status as underdogs could work in their favour.   After observing them at their getaway a reporter from the Daily Post who was present with the team concluded that ‘if comradeship and bonhomie should suffice’ then Liverpool would be playing in the final. If Villa were to beat the Reds he claimed it would not be ‘so easily as their friends imagine.’

Captain Harry Lowe knew that despite the odds being against them there was a chance for the Reds, as long as the players didn’t relax and they contested every move. The half backs, he told the Post reporter, would have to be at their very best to counter the Villa forwards and ease the pressure on the full backs. Forward Bill Lacey, scorer of two goals in the 5-1 win against West Ham in the last sixteen, emphasised the coolness of the players in the run in to the game. When asked his thoughts by Watson he jokingly replied ‘Beat the Villa, why,  we would beat rows of houses.’

On the Friday the rest of the directors arrived and confirmed the team selection. There were no surprises as everyone was fit, meaning the versatile Don MacKinlay and full back Sam Speakman, both taken down as cover, were the two to miss out.

Four special excursion trains took Liverpool fans down to the match for a special fare of 12 shillings. The first left just after midnight from Lime Street while two more departed Central Station at 6.15am and another went from Birkenhead.  For those not able to go to London, they did have he opportunity of watching the reserves in action against Huddersfield Town at Anfield, where it was promised that the semi final score would be posted pitchside every fifteen minutes.

After spending the week doing gym work and taking brine baths Villa’s players didn’t leave Birmingham until the Saturday morning. On arrival in London they’d have found the local papers reporting that they were as good as in the final already. One wrote ‘Aston Villa are going to win the cup, on their best form they are a wonderful side.’ Another declared that Liverpool had no class in their side, commenting that Villa were superior in every single position.  The only reason the Reds were still in the competition they said was because ‘Liverpool have had an easy cup journey so far’ and if they were to win it would be bad for football as it would show that  ‘form counts for naught and pure skill is of no account.’

Newspaper reports like these only made the Reds’ players even more determined, especially with such damning comments  as ‘Liverpool’s forwards are not good enough’ and ‘all clubs were hoping to be drawn against Liverpool.’ The ground was full an hour before kick off, 27,474 being present and they wiled away the time watching a band play, the performance only interrupted by an announcement that Cambridge had won the Boat Race. Watson’s fears over being heavily outnumbered in the crowd were unfounded as the London spectators gave the Reds a reception matching that which they gave to Villa, although there were  clearly more travelling fans from Birmingham than Liverpool there.

Early in the game though most of the play was in the Reds half, with Ken Campbell making a few good saves. When they did get forward Liverpool were given no assistance by the referee, who on one occasion stopped play to enquire if a Villa player was injured when he scratched his head. On another, a Villa player’s clearance cannoned off  a team mate and out of play but a goal kick was awarded, even though all players began lining up for a corner.

Villa’s undoing came when they began to believe in their own hype, over complicating matters and passing the ball around too much in exhibition style. Liverpool on the other hand were more direct and were rewarded on the half hour when  Jimmy Nicholl (below) headed home Jackie Sheldon’s cross. Villa had the better of the remaining fifteen minutes of the half but Campbell twice made good saves and Ephraim Longworth was outstanding at the back.

Nicholl was certain that he had made it 2-0 soon after the restart when his shot hit the bar and bounced back to Sam Hardy, the ex Reds keeper, in the Villa goalmouth. Liverpool’s players vehemently protested to the referee that the ball had landed over the line but he was having none of it . Undaunted by this disappointment Liverpool upped the pressure and Hardy was having a torrid time, on one occasion losing sight of the ball completely only for Bill Lacey to shoot wide. At the other end there was a scare when a shot caught Campbell full in the face but he managed to recover and continue playing.

Late in the game Arthur Metcalfe had a shot which hit the bar and rebounded to Nicholl who made no mistake in converting the rebound.   The cheers from all parts of the ground showed just how many Reds fans had made the journey. Villa knew they were beaten now and looked like they could concede again, only being saved from going 3-0 down when Lacey’s shot skimmed the post. Watson was so confident that he got up and left the directors box after the second goal, smiling at the pressmen as he walked past. At Anfield, play stopped in the reserves game as players congratulated each other and the crowd cheered at the news of Liverpool’s impending date at the Crystal Palace.

There was no arguing with the result, with a number of ex Villa players commenting on the Reds’ supposed inconsistency. Former captain  Howard Spencer said ‘Liverpool played a spendid game throughout’ and Charlie Johnston, a   player with the in the 1880s admitted ‘We cant cavil at the result, Liverpool were quite the better side.’

There was no time for celebrations in London for the players who finished getting changed in taxis that were lined up outside White Hart Lane to take them to Euston station for the express train.  Down at Piccadilly, where university students were enjoying merriment after the boat race,  ‘Northern Hordes’ invaded the gentlemanly celebrations with tricks and scams described by the Post as  ‘a disgrace to  a top hat brigade.’ When the Liverpool players arrived at Lime Street, they were met with ‘a scene of enthusiasm never before seen.’

Had Liverpool gone on to win the cup, the scenes of jubilation would surely have been surpassed further, but on 25th April they were beaten 1-0 by Burnley and would have to wait until 1965 for that first FA Cup win.