When Liverpool met Paris Saint Germain (PSG) in the semi final of the European Cup Winners Cup in 1996-97, they faced a mountain to climb in the second leg. Despite a 2-0 victory at Anfield, it wasn’t enough to overturn the deficit from a first leg debacle at the Parc de Princes.

Roy Evan’s side had a relatively straight forward route to last four, overcoming Mypa of Finland, Swiss side Sion and Norwegians Brann Bergen.  PSG were defending the trophy they had won a year earlier, but were off the pace in the French league and Liverpool were fancied to overcome them to reach the final in Rotterdam. 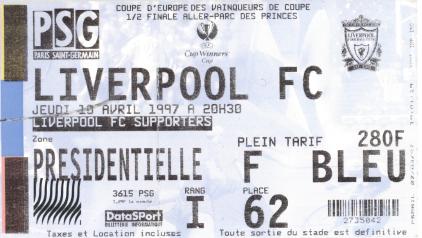 However, just like at Wembley in the previous season’s FA Cup final defeat to Manchester United, the talented Reds side chose on of the biggest stages to sink to a gutless defeat. Two first half errors by David James meant the Reds trailed 2-0 at the break, when the ineffective striker Stan Collymore was substituted. A late third goal gave PSG a commanding advantage and inflict Liverpool’s heaviest European defeat since a 3-0 reverse at Dinamo Tblisi in 1979.

Evans blasted his side, telling journalists “We did not defend, we did not attack, we lacked passion and pride. We were poor, it was our worst performance of the season, we never looked like defending properly.” Writing in the Liverpool Echo the following night, Reds columnist Ric George praised the conduct of the travelling fans and concluded “Those supporters who paid their way, gave their all, deserve better. Much better.”  Phil McNulty was even more scathing, referring the performance as “a dogs breakfast from first to last” and that “To describe it a shocking, dreadful, slip-shod and shapeless would be to lavish too fine a praise on them.”

Bookmakers lengthened Liverpool’s odds to win the tournament to 50/1. By the time of the second leg, the Reds had lost 3-1 to Manchester United at Anfield, effectively ending their hopes of winning the league title. However with memories of comebacks over other sides St Etienne and Auxerre still intact, it was hoped the power of Anfield may just help Liverpool turn the tie around and mount an improbable comeback. 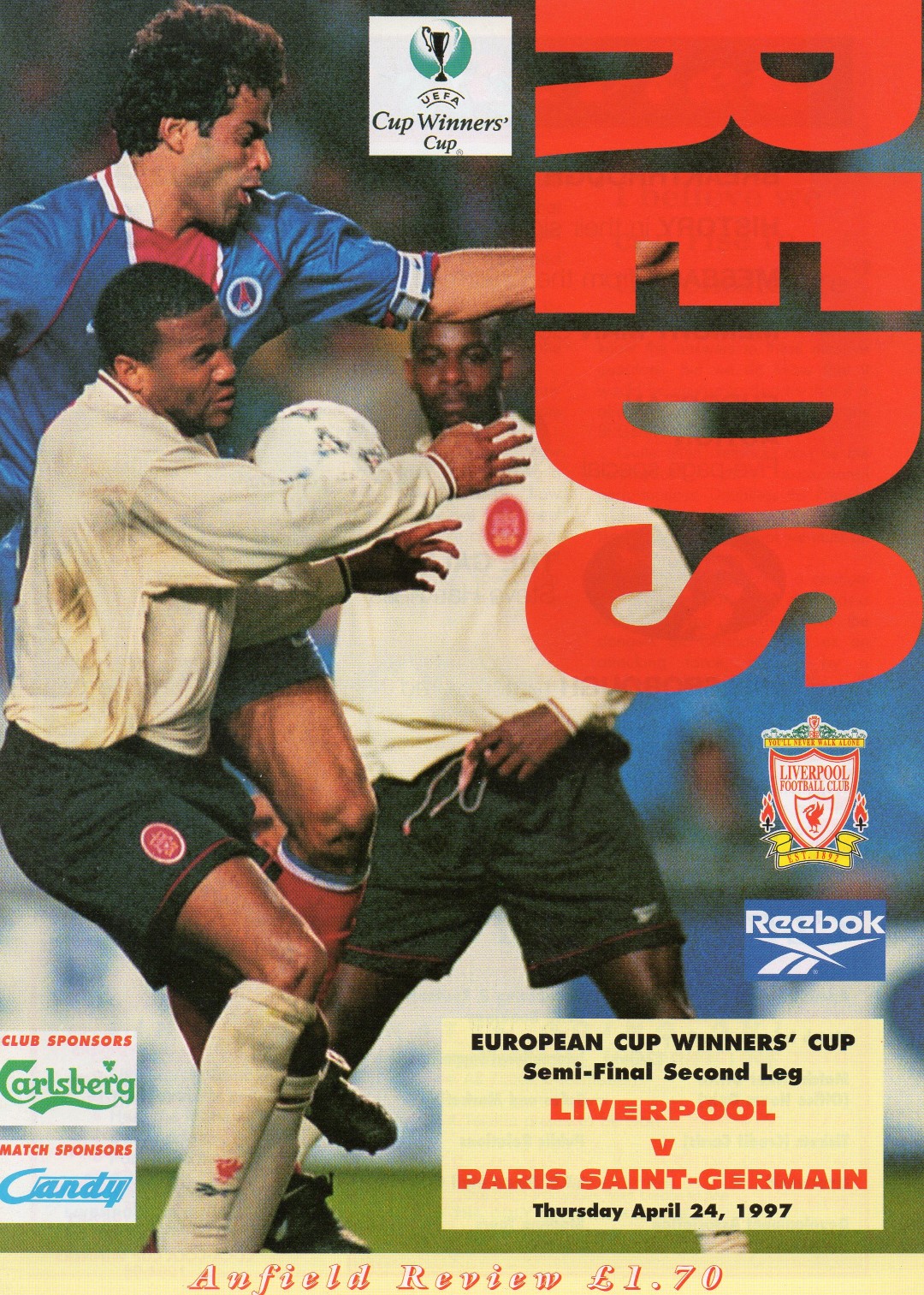 Evans made the bold decision to drop captain John Barnes, who didn’t even get a place on the bench. Patrik Berger was brought in to a four pronged attack alongside Collymore, Steve McManaman and Robbie Fowler, the only player to escape criticism in Paris. The usual five man backline was reduced to four, with Neil Ruddock being recalled to add some steel.

After surviving a second minute scare when Patrice Loko wasted a good chance, Liverpool took control and in the eleventh minute Fowler’s angled drive reduces the deficit. But for all their effort, the Reds were unable to break down a disciplined PSG side.  With eleven minutes to go Mark Wright’s towering header made it 2-0 on the night, whipping the crowd back up into a frenzy. Despite dominating possession and sending James into attack for a late corner, the Reds couldn’t find the all important goal that would take the tie into extra time.

Liverpool had regained some pride at Anfield but fans were left wondering ‘if only’. They had been beaten by an ordinary PSG side that had been humiliated in their domestic cup competition by a fourth division side. PSG coach Ricardo said “The last ten minutes of the game were the longest and most difficult of my life.”

An upbeat Roy Evans said “I couldn’t have asked any more from my team in terms of effort, passion and pride.” He warned the rest of Europe “Beware the British are coming”, referring to Liverpool and united’s progress to semi finals that season. Champions League qualification looked a certainty for the Reds. However they somehow conspired to win only one of their last three league games to finish fourth in the table and face the taunts of United fans for finishing ‘fourth in a two horse race’.

The following October Liverpool had the chance to show the French media what they could really do when they were drawn against Strasbourg in the UEFA Cup. In a mirror image of six months earlier, they suffered an embarrassing 3-0 defeat, before winning the return leg 2-0.