As Liverpool prepare to play host to Stoke City it may be worth remembering how their England World Cup winning goalkeeper Gordon Banks and the Kop had a mutual appreciation of each other. One of his best displays in front of he famous terrace came in 1972-73 in what turned out to be his last professional game as he was forced to retire due to injuries sustained in a car crash the following day. 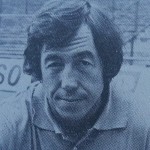 Banks first played against the Reds in October 1962, keeping a clean sheet in a 3-0 win for Leicester City at Filbert Street. He did the same again when his side won 2-0 at Anfield the following March, but it was on 27th April 1963 that he really broke Liverpool hearts. In an FA Cup semi final at Hillsborough, Banks denied Liverpool time and time again in the second half, helping his side progress to Wembley thanks to Mike Stringfellow’s last minute goal.

After the ga
me a press photographer got a shot of a disconsolate Ian St John which appeared to showed Banks laughing at him in the background. This led to him getting quite a few boos when Leicester visited Anfield the following November when once again Banks kept a clean sheet as his side won 1-0. However he reacted the the crowd in light hearted fashion, pretending to eat an apple that had been thrown into the penalty area. 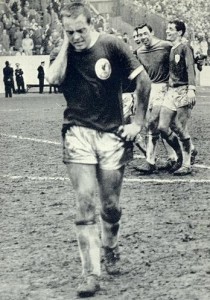 Banks finally conceded a goal against Liverpool at Filbert Street in March 1964, when the Reds won 2-0 to end the hoodoo and take a massive step towards the league title. The following season there was revenge for the FA Cup semi final, when Roger Hunt’s goal was enough to eliminate Leicester in a quarter final replay at Anfield. Banks and Hunt were then teammates as England won the World Cup in 1966 and the following season Hunt was again on target against Banks at Anfield, scoring in a 3-2 win.

In April 1967 Banks was transferred to Stoke City after losing his place to teenager Peter Shilton, another keeper who would enjoy banter with the Kop in later years.  Bill Shankly had actually showed an interest in signing the stopper, but could not convince the Board to part with £50,000 for a 30 year old keeper. He then looked to the lower leagues instead and signed Ray Clemence for £18,000 from Scunthorpe two months later, a transfer that didn’t turn out too bad in the end.

Banks didn’t enjoy as much success against the Reds as he had with his previous club, appearing on the winning side only once in ten games, a 2-1 win at the Victoria Ground in the last game of the 1967-68 season. He enjoyed his visits to Anfield though despite the results, describing it towards the end of his career as ‘my favourite ground by a mile’ due the club having fans that ‘want to see their own team win but appreciate good football even when it comes from the opposing side.’

In 1971-72 Banks won only his second domestic honour as Stoke beat Chelsea to win the League Cup, adding to the medal he won for winning the same competition with Leicester in 1964. He also received individual acclaim when he was voted the Football Writers Player of the Year and retained his England place. However despite signing England’s World Cup hat trick hero Geoff Hurst for £80,000 from West Ham, Stoke struggled at the start of 1972-73 and were eliminated from the UEFA Cup by Kaiserslautern in the first round.

Going into the game at Anfield on 21st October 1972, Liverpool were top of the table and unbeaten in twelve games in all competitions, while Stoke were one of five sides at the bottom who were only separated by goal difference. Their line-up included John Mahoney and Terry Conroy, internationals for Wales and the Republic of Ireland respectively, but there was no place for veteran midfielder Willie Stevenson, an Anfield favourite for five years during the 1960s. 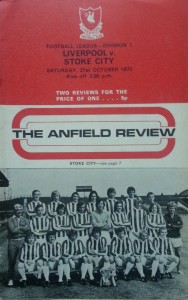 Tommy Smith returned to the Reds side as captain after a few weeks out injured but John Toshack broke down in training on the Friday, meaning Phil Boersma retained his place. It had been Liverpool’s first midweek of the season with no game and their freshness showed early on, as they took the game to Stoke whilst attacking the Anfield Road end. Emlyn Hughes and Phil Boersma shot just wide and Banks made good saves from another Hughes effort, as well as a 25 yard low drive by Alec Lindsay.

The first half hour was all Liverpool, the players revelling in the influence of Smith who was driving them forward and full back Chris Lawler was a regular attacker, seeing a header and lob both saved by Banks. Despite the Reds dominance though, Stoke had a game plan to pack the penalty area, forcing the Reds into mainly long range efforts, which Banks was happy to deal with.

In the 33rd minute Stoke took the lead against the run of play from an innocuous looking free kick that was awarded on the half way line. John Marsh punted it into the area where Geoff Hurst had a shot that hit the bar, bounced down to Jimmy Greenhoff who headed it into an empty net with Ray Clemence stranded. Liverpool piled on the pressure for the rest of the half without success and there was one dangerous moment when Stoke counter attacked and Hurst’s half volley went just wide of a post.

As Banks ran to the Kop end for the start of the second half the crowd shouted ‘Clemence for England’ leading to him blowing a raspberry in return. Within a minute it should have been 1-1 when Boersma, who had been quiet in the first half, somehow fired over from within the six yard box after Heighway had crossed.

Liverpool continued to dominate possession but were running out of ideas as high balls into the box had no height to meet them and passes were often intercepted by the numbers of Stoke players tracking back. It seemed inevitable that if the Reds were to equalise, some good fortune was required and it came when an indirect free kick was awarded in the 66th minute when Banks took too many steps with the ball. Smith touched the ball to Hughes, who hammered it into the roof of the net to the relief of the Kop.

Liverpool poured forward in search of the winner, Kevin Keegan hitting a shot across the face of goal, Boersma having a dipping volley drop just over the bar and Smith’s free kick bouncing off the wall. Finally, in the last minute Hughes took a quick free kick and Ian Callaghan’s shot took a deflection off Eric Skeels and deceived Banks to give the Reds a much deserved victory.

The next day Banks was involved in a car accident when his Ford Granada collided with a van as he drove back from a physiotherapy session at the Victoria Ground. It was clear from the outset that it was serious as he was taken to North Staffordshire Hospital where he received 200 stitches. Writing in the Daily Post the day after the accident, Bob Whiting said that if the game at Anfield had turned out to be his last, then there could not have been a more nostalgic setting for it.

At the end of the season Banks announced his retirement from professional football at the age of 35, although he did go on to play for Fort Lauderdale Strikers in the North American Soccer League at the end of the decade. Ironically, Banks’s accident opened the England door for Clemence, who would go on to do battle for the keeper’s jersey for the next ten years with Shilton. Banks old Liverpool foe Roger Hunt would eventually become a team mate of sorts as the two of them sat on the pools panel.