Liverpool’s opening game of the 2014-15 season may well be the last time Southampton play in front of the Main Stand in its existing form. It was the Saints who were he opposition for the official opening in 1973, when Len Shipman, President of the Football League , narrowly avoided serious injury when he tumbled down the stairs.

The new stand, which was effectively an extension and re-roofing of the old barrel roofed structure, had taken two years to construct. It seated just over 8,000 fans with room for 5,000 standing in the paddock in front. Writing in the match programme for the Southampton game on 10th March 1973 which marked its official opening, Chairman Eric Roberts wrote: Today’s ceremony is the culmination of the rebuilding of Anfield which started just 10 years ago. In this period we have spent over one million pounds in our effort to make this stadium among the best, not only in Great Britain, but also in Europe.

Roberts went on to say that first and foremost though was the team and that: Uppermost in our minds all the time is the need to see that Mr Shankly and his staff have all the help that the directors can give them, and thus ensure that the club remains in the forefront of League football. There was no doubt that this was the case as at the start of the season the Reds had matched their transfer record to sign midfielder Peter Cormack from Nottingham Forest for £110,000. Then in January 1973 Lou Macari looked set to sign for £200,000 only for the player to choose Manchester United instead as he felt he had a better chance of getting a game there.

Cormack delivered on Shankly’s promise that he would provide extra goals in midfield and with ten games to go the Reds were top of the league on goal average from Arsenal, who had played a game more. It was a thrilling four way title race with Leeds and Ipswich both four points  behind with two and one games in hand respectively, but the Reds had the easiest run in of the challengers and Leeds still had to come to Anfield.

The guest list for the Southampton game was an impressive one, headed by the Duke of Kent, who was also President of the Football Association. He became the first member of the Royal Family to attend a match at Anfield since 1921, when King George V attended an FA Cup semi final between Cardiff and Wolverhampton. Also in attendance was FIFA President Sir Stanley Rous and Football League President Len Shipman (below), as well as League Secretary Alan Hardaker.

Hardaker was not too popular with Anfield officials who feared a fixture pile-up due to the club’s continued involvement in the UEFA Cup. In midweek the Reds had beat Dynamo Dresden 2-0 at Anfield in the first leg of the quarter final but he confirmed that although the 2nd leg of the semi final was scheduled for 25th April, just two days after Liverpool were due to face Leeds in that crucial league game, that the game could not be re-arranged if the Reds got through. He did make the concession though of allowing the Reds to switch their game at Coventry, due to take place on Tuesday 24th April, thus avoiding the prospect of games on three successive nights. However, that was only because the Sky Blues agreed to playing the game on another date.

Earlier in the season the Football League had suggested the Reds play a League Cup tie in London on a Monday night then fly out to Berlin for a UEFA Cup tie on the Wednesday. Given such incompetent planning, it was probably not surprising that when Liverpool signed Bristol City forward Peter Spiring a few days before the Southampton game, assistant secretary Bill Barlow drove to Lytham St Annes with the transfer forms to make sure they were processed in time.

The Southampton match fell on the day of a train strike, which meant the crowd of 41,674 was the second lowest of the season at Anfield in the league. This disrupted Southampton who had to make the long journey by coach instead and they were followed by just a handful of fans.There was no such travel problems for the Duke though, whose private plane was met at Speke Airport by several hundred onlookers. The Lord and Lady Mayoress were waiting for him on the tarmac and a chauffeur driven car took them to Anfield where a VIP lunch was laid on. Then, as the party made its way from the boardroom down to the foyer, Len Shipman took a tumble and fell down the stairs, banging his head. Club officials quickly helped him to his feet and checked he was OK before he was sent on to join the rest of the guests.

There seemed to be little concern shown for Shipman by others in the party, as the Duke of Kent, watched by club president T. V. Williams, got on with the business of unveiling a plaque made of Grecian white marble to commemorate the opening of the stand. 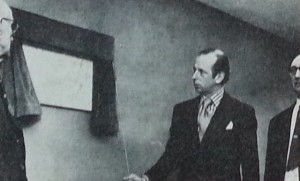 In the game itself Liverpool took a two goal lead when they scored twice within the space of a minute late in the first half through Larry Lloyd and Kevin Keegan. However before the referee blew for the interval there was just enough time for Mick Channon to take advantage of some hesitancy in the Reds’ defence to nip in and head the ball past Ray Clemence after a long punt downfield by the keeper. On the hour Paul Gilchrist equalised after some slack marking but Keegan got the Reds out of jail with three minutes remaining, when he headed in a Phil Boersma cross.

The game may have been nerve racking for the Reds’s fans but the Duke of Kent enjoyed the occasion, commenting afterwards that it was an exciting game and that the crowd had been well behaved and supported their team well. Sir Stanley Rous said the Reds were lucky to have such wonderful supporters although there were no words of encouragement from any of the Football League hierarchy, who perhaps suspected that Shipman was helped on his way when he fell down the stairs.

By the end of the season the new Main Stand witnessed Liverpool being presented with their first title for seven years and there have been no occasions when royalty have attended games since, unless King Kenny gets counted in that bracket.