Liverpool’s match against Brondby on 16th July 2014 sees the squad fly in and out spending very little time in the city. It couldn’t be more different than the club’s visit there in 1910, when they spent the best part of a week in the city, getting drunk with fellow tourists and the opposition on the club’s first foreign tour.

In their eighteen years history to date, Liverpool had never played a game outside the British Isles, although the squad had been rewarded with a holiday in Paris after winning the league in 1906. There had been no title in 1910, but the club decided to break new ground and go abroad, having lagged somewhat behind others in this respect. Neighbours Everton for example hadn’t just been to Europe, they had gone inter-continental having toured South America a year earlier.

Predicting that the tour would be a ‘most enjoyable one’ the Evening Express observed that the Reds players would have to be at their best. They had recently beaten an FA representative side and the paper said they had made great strides in recent years.

The party of nineteen which set off from Central Station at noon on 11th May consisted of fifteen players, manager Tom Watson, trainer Bill McConnell and two directors. No journalists accompanied the team, but Watson promised to telegraph the results and also send letters containing reports of games. They were leaving at a time when the nation was in mourning, King Edward VII having died of bronchitis five days earlier.

On arrival at Hull the party were met by Mr Langley, manager of Hull City, who saw them off from the quay as they departed on board the Finland Steamship Company’s steamship Polaris. They enjoyed a Finnish dinner but for many that was the last they ate on the crossing, because as soon as they left the Humber the North Sea was being battered by near gale force winds. The crossing was a horrendous one and it took nearly 36 hours to reach the coast of Jutland, some ten more than was scheduled.

After finally reaching Copenhagen on the afternoon of Friday 13th May, the players were allowed to get used to being on dry land again and had two days at leisure. They then set off for Gothenburg in Sweden, where they beat a Stockholm XI 2-0 and Örgryte 3-0. The Reds were due to travel back to Denmark on 19th May, but they ended up staying an extra day in Gothenburg but the scheduled game against a Danish Select XI on the 20th was postponed as a mark of respect to King Edward VII. He had died five days before the Liverpool party set off and there was considerable mourning in Denmark at his death as his wife Alexandra was Danish.

The last day in Sweden was spent on the lash with the Manchester City squad, who arrived there that day for the last leg of a tour that had also taken in Belgium, Germany and Denmark. It was a bleary eyes squad that set off to Copenhagen the following day, where they arrived to find temperatures pushing ninety degrees and were taken on a boat tour of the harbour.

On Sunday 22nd May the Reds took on a Danish FA XI in searing heat. Nobody knows whether it was the heat, hangover or sight of women in the crowd wearing summer dresses that led to the hosts shocking the tourists by winning 3-0, making amends for their 5-2 defeat against City. Watson admitted that they may have taken the opposition too lightly, with him writing in his letter to the Evening Express that ‘their knowledge of the game was an eye opener to all.’

After the game the 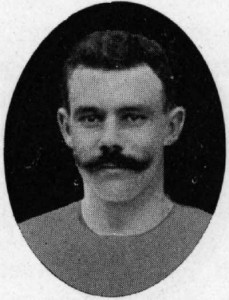 Reds party attended a dinner hosted by veteran Danish veteran player Johannes Gandil (left), who had represented his country at the Olympics in both football and athletics. Watson described in a letter how ‘our healths were drunk with the usual “rar, rar, rar”’. The final game of the tour was on Tuesday 24th May when they faced the Danish FA XI again. This time, in far cooler conditions given it was played of an evening, Liverpool won 1-0 in with the scorer’s identity remaining unknown. No more letters were written by Watson, with the following day’s Daily Post and Mercury simply printing in the results section: ‘Liverpool 1 Denmark 0’.

Despite the last match being on the Tuesday, the players were given a few more days in Denmark before beginning their journey home on Friday 27th May, finally arriving back at Liverpool Central station at 7pm on the Sunday evening. The Evening Express reported that the players were in excellent condition and had ‘evidently thoroughly enjoyed themselves’. Scandinavia had obviously made a mark on the party, as they would be back there the next time they were abroad four years later.