In the second home game of 1966-67, Liverpool beat newly promoted Manchester City with a late winner after they had surrendered a two goal lead.

Champions Liverpool had won their opening game of the season against Leicester, but two away trips since then had ended in defeats to Everton and Manchester City. In addition to beating the Reds a week earlier, newly promoted City had won against Sunderland and drawn with Southampton and had hopes of maintaining their unbeaten start to the season.

The clash with City was set for Tuesday 30th August 1966 and the City team stopped off in Lymm on their way to Liverpool for an early evening meal. Leaving in what they thought was good time, they got caught in a rush hour traffic jam and then were held up in matchday congestion once they got near the ground. 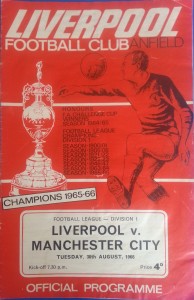 With just half an hour to go until kickoff, the City squad had no choice but to leave the coach and make the rest of the journey on foot, hauling the kit skips with them. Needless to say the ribbing they got from Reds fans was merciless and on arriving at the ground, there was no time for any preparation or teamtalk as the kickoff had already been delayed for a short time.

Liverpool were swift to punish their opponents and with Peter Thompson in fine form on the wing, they were 2-0 up inside the first seven minutes through Roger Hunt and Geoff Strong. However, City managed to regain their composure and Jimmy Murray pulled a goal back before half time. In the 2nd half City stunned the Reds when Matt Gray scored an equaliser. However, their earlier ordeal finally took it’s toll and Roger Hunt got Liverpool’s winner ten minutes from the end.

For City manager Joe Mercer, an ex Everton player, the defeat had been hard to bear as he was keen to do the league double over the Reds so early in the season. He blamed the coach driver for taking the route he did (the M62 was just at the planning stage then) but they still hadn’t recovered by their next game. Seven days later West Ham beat them 4-1 at Maine Road.